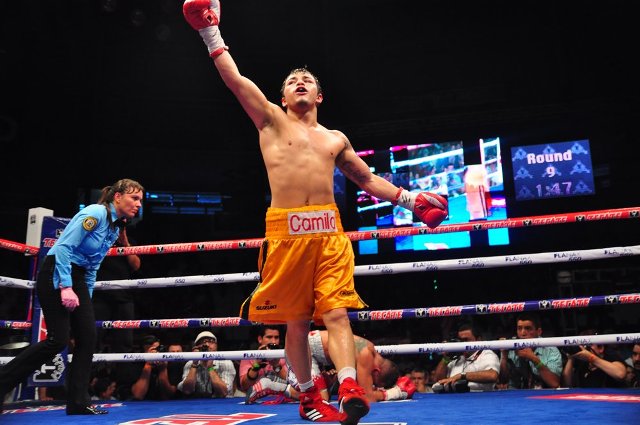 Boxing fans perhaps felt a bit unloved Saturday night, as UFC 155 unfolded, and there was no boxing action to take in. No HBO, Showtime, no EPIX, no Wealth, no choppy stream from Thailand. We want to help with your little addiction problem, because cold turkey is no fun.

Yes, this is a test, a separation of the mere diehards from the maniacal. Stay up past your bedtime, or set your alarm clock and have a Red Bull ready to pop in the fridge, or be forever dismissed as a mere diehard.

The 18-0-1 Uchiyama will defend his title at home, in Japan, which is 14 hours ahead of the Eastern Time Zone. Uchiyama, the Transnational Boxing Rankings’ No. 1 130 pounder,  drew in is last outing, against Michael Farenas, after he was cut badly by a had clash and the bout was stopped in the third. This will be the 33-year-old Tokyo resident’s sixth title defense. Vasquez is a 25 year-old from Costa Rica with a 29-0 (15 KOs) record. He won the interim title, which was vacant, against Santos Benavides in Nov. 2011 (UD12) and defended against Jorge Lacierva (TKO9) in Mexico on July 21. Working in the other guys’ comfort zone could again come in handy in Japan.

I reached out to Vasquez in Japan, thru his wife, fellow boxer Hanna Gabriel, to get a sense of how he sees this matchup, and the stakes. “I am not nervous, I am excited,” he said, via email. “It’s a great opportunity, it’s a fight that will take me to the next level.”

I like to ask about a fighter’s level of certainty about winning; I find it interesting that people will sometimes betray their lack of conviction in themself. Is Vasquez certain he will beat Uchiyama or is he merely hoping to win?

“Hoping… no, I wouldn’t say hoping, I have prepared myself to give everything I have in the ring, and I expect to win,” Vasquez said.

And what strengths, and what holes does he see in Uchiyama’s game?

“They say he is a hard puncher, I guess I will find out, and his weaknesses, well, he bases his game on being a hard puncher, not on fighting smart,” the Costa Rican said.

Off the top of my head, the Vasquez-Gabriel husband-wife duo is the tip-top in the fight game. When will the boxing world figure out this fact?

“I think the fact that we are from Costa Rica, which is a country that has no real boxing culture, affects us, and that’s why we are not all that known/popular in the world of boxing,” he said.

Anyone going into the favorite’s realm has to consider that the judges might not smile brightly upon them; does Vasquez think he needs a KO to beat Uchiyama?

“I am ready to work the 12 rounds, and if I can drop him before, great, but I am ready for 12 rounds. Some people have told me I need a KO to win, but I will throw enough punches to not leave any doubt,” he said.

The Night the Boxing Judges Took the Spotlight

Leon Spinks Passes Away at Age 67

Ali-Spinks I: A Trip Down Memory Lane in Search of the Elusive Betting Line

Boxing Odds and Ends: The Return of Otto Wallin, Bad Judging, and Obits

Stan Hoffman and Mitchell Rose: Anecdotes from the Pen of a Veteran Boxing Writer

HITS and MISSES: Boxing is Back!

The Canelo-Yildirim Travesty was Another Smudge on ‘Mandatory’ Title Defenses

Ramirez vs. Taylor Adds Luster to an Already Strong Boxing Slate in May

From the Desert, Jack Dempsey

The Canelo-Yildirim Travesty was Another Smudge on ‘Mandatory’ Title Defenses

Joseph Parker vs. Junior Fa Has Marinated into a Kiwi Blockbuster