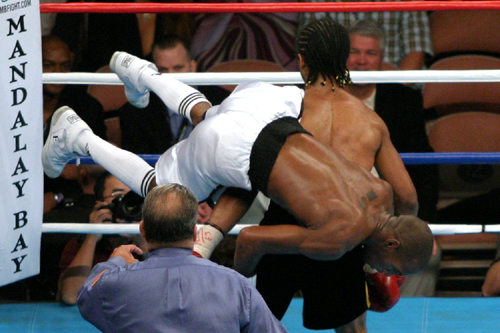 It looked so perfect for middleweight prospect Tokunbo Olajide.

Olajide, the younger brother of Michael ‘the Silk’ Olajide’, a middleweight contender of the late 80’s, was on the fast track to boxing utopia.

He had ‘the look’ that managers and promoters all look for. Also, he had the bloodlines that can turn into ‘feel good’ stories that the media just eats up.

The younger Olajide is also an affable and intelligent young man with interests outside of boxing. And to top it off, he was born and bred in the media capital of the world- New York. Olajide had it all. And he was on the verge of breaking out from being just a mere contender to being a legitimate world class contender who would eventually ascend to being a world champion.

But a funny thing happened on his way to super stardom: he would get knocked out on national TV by an unknown Colombian Epifanio Mendoza in one round.

With a left hook-right hand combination, Olajide is now on the fast track for becoming the next Shannon Briggs, much less ‘Silk’ Olajide, who at least was undefeated prior to his championship challenge of IBF middleweight titlist Frank Tate.

Check out more boxing news on video at The Boxing Channel.

Steve Kim
Related Topics:
Up Next

The Sad Saga of Thad Spencer

Avila Perspective, Chap. 195: An Arc of Boxing from Coachella to Brooklyn

A Cornucopia of Accolades for Venerable Sportswriter Jerry Izenberg

Danny Garcia Looked Very Sharp in Ring Return, Not That Everyone Noticed

A Cornucopia of Accolades for Venerable Sportswriter Jerry Izenberg

Boxing as a Buffer to Global Lunacy

Danny Garcia Looked Very Sharp in Ring Return, Not That Everyone Noticed

Avila Perspective, Chap. 195: An Arc of Boxing from Coachella to Brooklyn